Emma's birth was absolutely beautiful. It was everything I had hoped for. Everything I had thought it could be and yet, nothing like I had imagined. It was completely empowering to witness what my body is capable of. I had a pretty awesome pregnancy for the most part. The first three months were the toughest. I had constant nausea and I was completely consumed with exhaustion. Those days felt like they would drag on forever, but that was nothing compared to the last few weeks of pregnancy. I was so ready to hold my daughter in my arms. When my due date came and went, I was more than a little frustrated. I tried to remind myself that she would come when she was ready.

I was planning to give birth at the Sierra Natural Birth Center, and for safety reasons, if I reached two weeks overdue I would have to go to the hospital to give birth. When I only had four days before I was over due, I was desperate. My midwife stripped my membranes for the second time, hoping to jump start my labor. She also suggested that I see an acupuncturist. My husband probably thought I had totally lost it, but I got an appointment that day, because let's face it, I was huge, tired, and SO ready to get this show on the road! After my acupuncture, we headed home. I was having braxton hicks contractions every 4 minutes the whole way, which the acupuncturist told me may happen. (Little did I know, that just 6 hours later I would be in labor!) I took a long walk that evening and headed to bed early.

At 8 o'clock I had my first real contraction and tried, without success, not to get excited and go back to sleep. At 8:30 I began timing them. 4 minutes apart and lasting 45 seconds to a minute! I got a little nervous because I wasn't expecting them to come so close together so quickly and we were an hour from the birth center. I waited an hour and then called my midwife and told her what was happening. She told me if I was comfortable, to stay home and sleep. As she was telling me this, a contraction hit me and I had to sway through it. I told her I felt that I needed to come now. She told me to follow my gut and come. I woke up my husband, Josh, and we loaded up our things and left. We were chatting in between contractions and I was feeling really calm. I was feeling confident in my body as my contractions got to the point where I couldn't talk through them. I had prepared myself for this moment for months, I was so confident. Looking back now, I realize that I never got scared. It was more like, "Ya, I'm having a baby today. Let's do this!"

We got to the birth center around 11 o'clock and Ellie came out smiling and said, "Happy Birth Day!" Seeing her face, so full of excitement and joy, was why I was so happy to be giving birth there. She was preparing the birthing room and getting it ready for us to sleep. I knew there was no way I could sleep through those contractions. She asked if I wanted her to check my progress, but warned me not to get my hopes up, as I had only been in labor for a few hours. I wanted to know. How could I not!? She was shocked when she felt I was 6 centimeters dilated! I remember looking at Josh with shock and excitement. I kept thinking, "I rock at labor!" But at the back of my mind there was that tiny voice warning me that this meant transition labor was near.

Ellie urged me to try and rest as much as possible. I decided to try and lay down with Josh. Big mistake. I had two contractions back to back. I couldn't get up fast enough. Literally. I remember just telling Josh to get me up. That was the one and only time I felt fear. There wasn't a pattern to keep me grounded. By the time Josh got me up on my feet and in his arms I was in a full on panic attack. The contractions eased when I was swaying. How some women can handle being on their backs in a hospital bed, I'll never know. But that was not for me!

There was one thing that I needed during every contraction and that was my hubby. He was amazing. He gave me strength in ways that I never knew he could. The only time he left my side was to run to the kitchen to get us snacks and water in between my contractions. Ellie was coming in and out checking on me and monitoring our baby's heartbeat. We called our families and told them that things were progressing quickly and that it was time for them to come. Ellie suggested that I get in the tub and run warm water down my back during contractions. Josh was there, kneeling in front of me, as we talked and joked between contractions. Labor is a funny thing. It's painful, sure, but not unbearable. You get these breaks in between the pain that you feel totally normal. You laugh at your husbands silly jokes and the things that happen during labor that totally break the barriers in your relationship. It's a crazy, emotional, beautiful thing.

The birth tub was filled by the time our parents and Josh's sister, Tiffany, arrived. I felt a little more confident when these women who love me came walking in. Tiffany looked excited, and my mom looked like she was in more pain than I was. They both immediately offered me support. At that point, I was so tired. It felt more like work than before. It took more focus. I remember closing my eyes during each contraction. Tiffany suggested keeping my eyes open and focusing on Josh's eyes through a contraction. This helped. It gave me something other than the pain to focus on.

There was a point when I just needed Josh in the tub with me. He got in and Ellie wanted to check my progress again. I was between 9 and 10 centimeters dilated and she told me that if I wanted, she could push the lip of my cervix over the baby's head. I was all for anything that would speed things up, so during my next contraction, that's what she did. The following contractions were extremely intense. I had the urge to push and Ellie told me to follow my body's instincts. I was excited to get to help get our baby girl out! These contractions were forceful. There was no way I couldn't push. My body was out of my control. It was exhausting. But when I felt the top of her head, I was beyond excited. I could feel her hair through the caul. It was like a tiny victory and I got another surge of energy. With the next contraction, my water broke. 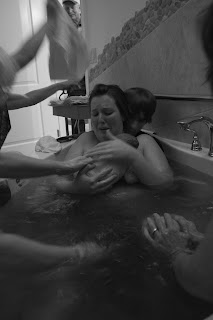 I remember talking to my little girl at this point. Encouraging her to come out. I pushed for an hour. When her head finally came out I was so relieved. With my next contraction I pushed and she flew out and into my midwife's hands and she was immediately on my chest. I was totally shocked that she was in my arms. She immediately let out a wail that let me know she was perfectly alright. I looked at my baby girl and said, "Hi Emma. I'm your Mama!" I was so relieved, and so in love. I held her as we chatted about how much work we just went through together. We waited until her cord stopped pulsing and her Daddy cut it. I pushed out my placenta and my midwives seemed to be slightly concerned that my uterus was "boggy". They had me pass my baby to my mom while Josh jumped into the shower to warm up so he could hold Emma skin to skin. It was a struggle standing and crawling out of the tub and into bed. I remember not really knowing what was going on until I was getting a shot of pitocin in my thigh. Ellie explained that my uterus was not contracting down like it should, so the pitocin would make it contract. I wasn't too worried about it. All I wanted was to hold my baby again. My mom brought her over and her and Ellie helped me begin breastfeeding.Our family left shortly after to give Josh and I our time with Emma. I got a second degree tear and got stitched up with Emma in my arms while Josh assisted Ellie. Emma arrived on February 11th at 5:37am, weighing 9lbs 6oz and was 21.5 inches. 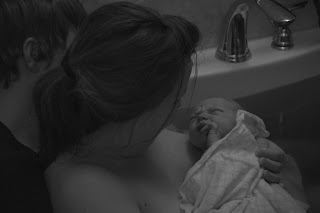 After Ellie made sure we were all ok, she left us alone in our room to enjoy our baby. I couldn't take my eyes off of her. I was so amazed with her. I was so in awe of her and what I just went through to bring her earth-side. I had just undergone something that changed me, made me into someone I'd always wanted to become. I was a mother, holding onto my daughter with the fiercest love I'd ever know.
Posted by Unknown at 10:18 AM No comments: